The Art of Balloon Drops, or Soft Special Effects

Rocky Toomey of Future Affairs Productions in Rhode Island shares his experiences with coordinating balloon drops for clients like Katy Perry and Phish. With New Year's Eve celebrations and hundreds of balloon drops around the corner, now is the perfect time for you to brush up on your knowledge of this crowd-pleasing special effect!

What are "Soft Special Effects?"

What I am referring to when I say “Soft Special Effects” are those effects where there is no need to pull permits for the effect to happen. This includes such things as Balloon Drops, CO2 Confetti/Streamer Cannons, CO2 Confetti Gerbs, and the newest one to come on the scene is the Balloon Banner Drop, which by the way was invented by our company. More on that later.

Over the many years that our company has done balloon drop effects, the most amazing comments we receive are from those people who have actually been on our crew. Let us explain: It seems we are never for the lack of crew for any of these events when people find out we are working for a specific band or celebrity. We have done drops for groups and stars such as Aerosmith, Phish, Katy Perry and so many more. We have had accountants, CEO’s, Architects, etc asking us to be on our crews who have been die-hard fans for these groups we are hired to work for. Because it does take an experienced crew to properly prepare for these effects, we only take on a new “fans” so to speak if they agree to commit to training beforehand. As a result, over the years we have turned these die-hard fans into some very seasoned crew people who we have taken on tour to many events with us across the country. Their comments are always the same… “I never knew how much work went into a balloon drop” or “I will forever have respect for those people behind the scenes who provide this effect” or “this experience was incredible, I will never forget it!”

Such comments have come from those who have had actual hands-on contact to experience what is involved with this special effect. As one crew person put it, “I will never see a balloon falling from a ceiling without realizing how much work and planning goes into it and how amazing an effect it really is.”

So what makes a balloon drop special?

Well, first of all it has to be done professionally and coordinated with all parties involved from the client right down to the stage manager, the producer and many times the in-house union. Everyone needs to work together to make the effect perform like it is designed to.  There are many horror stories out there where balloon drops have failed and at times it has been wrongly blamed on the union crews who are usually responsible for the actual opening of the balloon drop bags.  Who could ever forget the fiasco that happened when the Producer, Don Mischer was accidentally heard dropping an F-bomb live on air during the CNN’s 2004 Democratic National Convention coverage of their balloon drop that didn’t happen.

This is why it is important to hire the best possible team that not only knows what they are doing when it comes to designing a balloon drop, but also knows how to communicate with all the players involved. This is so very important when you are working a union floor, it’s their house and you have to play by their rules. If you know this going in, yours and everyone else’s experience will be rewarding instead of frustrating. We have done many of our best balloon drops on a union floor like at Madison Square Garden, and we love working with the MSG IATSE crew. 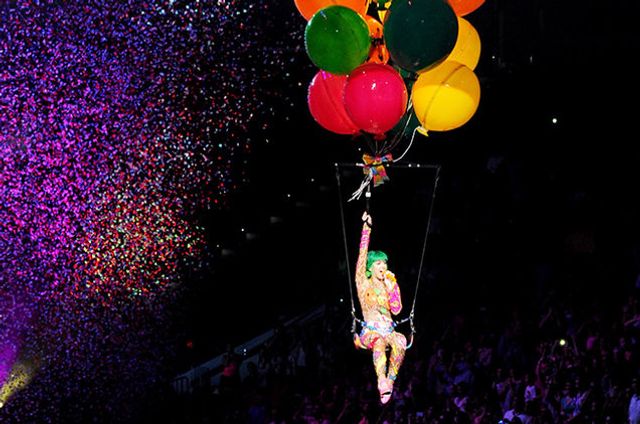 The "Design" of a Balloon Drop

Earlier we mentioned the “Design” of a balloon drop as being an important factor in the making of this great effect. The design of a successful drop can take on many factors, from the very beginning of the whole process prior to arriving on site to the final execution of the drop itself.

Working with someone who is very knowledgeable of the mechanics of creating a balloon drop is essential. From the design of the holding bag, the fail proof release mechanism, to flying the drop in the air are all very important parts of making it all work when the cue is given and all those drops open with ease. This person also needs to be very much involved with the actual effect itself because they need to know the “fall rate” of your drop! Very often the cue to a drop has to be given prior to the actual time it is to happen. For instance, many of our New Year’s Eve and concert drops are starting to be pulled and opened seconds before the actual cue of when it is to happen. This will all depend on the effect that is wanted by the performer, producer and/or the stage manager calling the cue. If a balloon drop is 150 ft in the air and the performer wants these balloons to hit the stage at a specific time the fall rate has to be calculated into the performance.

Performance also counts on the production portion of the whole event. When we do very large balloon drops there are a lot of logistics that go into the event. How many people do you need to inflate the balloons? Who is doing the inflation? Where is the inflation going to take place? It may be a union house so the union does your inflation. How do you calculate the time will it take to inflate? How long will it take to rig the balloon bags once they are all inflated? How many riggers are needed to fly the balloon bags? As always, time is money, and if your drops are not ready to fly when the riggers are there to fly them this could cost the producer a lot of money! No producer wants to hear that their union call has to go into overtime because the balloons aren’t ready to rig! Next, there needs to be a plan of action for the execution of the drop. How many riggers are needed to be in the ceiling for the drop to happen? It’s dark up there on the catwalk, so how does each rigger find the many balloon bags they need to pull? Lastly is the out or strike of the event. All those bags have to come down, which is very easy, but it has to be part of the whole equation! This is why it is important to hire the best team possible and this even applies to what appears to be a “simple” balloon drop.

Now we promised you more information on the “Balloon Banner Drop” which was invented and performed at the 2016 Opening Event for The Special Events Show in Orlando, Florida. This not only provides a traditional balloon drop but also incorporates a new effect, “the diamond banner drop”. When the balloon drop bag opens, the balloons fall to the floor as predicted, but an additional effect takes place. Depending on the distance from the ceiling the balloon drops are rigged there are custom banners sewn into the bags that will stay attached to the bag when it is open. The banners cascade down with the balloons and stop just above the heads of the attendees. This makes for the most incredible effect as the lighting in the venue hits the hundreds shinny foil banners making the room sparkle for this memorable effect.

All of these special effects are a fantastic addition to a just about any event, but be aware of the people you are hiring. The effects may seem simple enough, but if not done by professionals who have had the experience and the knowledge to do it right, you may end up with a very visual disaster!

Future Affairs Productions is a custom event design and decorating company based out of Rhode Island. With over 30 years of company experience, their team specializes in a wide variety of balloon drops and effects for Fortune 500 companies and concert venues all over the world.